Lately there's been a whole lot of talk about Brit Hume's suggestion that Tiger Woods renounce his Buddhist faith and embrace Christianity. As last night's post showed, even The Daily Show got to weigh in on the ensuing controversy.

One thing that struck me as unfair and unbalanced regarding this situation was the fact that of all the world religions out there, nobody suggested he pursue anything beyond the 'big 3' (or 4, or 5--if you want to include Hinduism and Buddhism).

I think most of us are fairly aware of what each of the most common religions have to offer. But what about the 'other' major religions? Tonight I'd like to offer a brief exercise in comparative religion...beyond the 'big 3', in the hopes of providing poor Tiger a couple more alternatives to the same ol' same old. 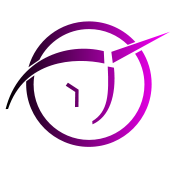 Faith of the Invisible Pink Unicorn [May her holy hooves never be shod.]

Like most religions, the faith of the Invisible Pink Unicorn rests on several tenets:


2. She prefers Pineapple and Ham Pizza to Pepperoni and Mushroom. The latter is said to be eaten only by followers of the despicable Purple Oyster (of Doom).


3. The Followers of the IPU have more Holy Days than those of all other faiths put together, as any Holy Day of any faith is automatically an IPU Holy Day. Holy Days are used by the Faithful to sow seeds of doubt and uncertainty in the minds of addicts of other religions. The Holiest Day of the Year is April 1st. It is the day on which She suggests we find a religious nut and say "There is as much evidence for the existence of your god/gods as there is for the Invisible Pink Unicorn, why don't you check out her web-site, maybe you'll learn something?"


5. Certain chosen followers of the IPU are blessed with visitations, shown with signs in their laundry (i.e., raptured socks). See the Revelation of The Lost Prophetess of AOL for more details.


Steve Eley, self-annointed 'Chief Advocate and Spokesguy' for the Invisible Pink Unicorn [Peace be unto her.],  makes the following claim in defense of his faith:

*Information about the IPU respectfully borrowed from Invisible Pink Unicorn Web and used for educational purposes only. For more information, visit Her website at http://filer.case.edu/bct4/ 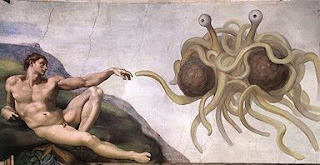 Church of the Flying Spaghetti Monster (aka Pastafarianism)

According to Pastafarian Prophet, Bobby Henderson, the basic tenets of the Church of the Flying Spaghetti Monster were revealed to him in 2005, as a response to the Kansas State Board of Education's decision to include Intelligent Design as part of it's science curriculum. They include the following:

1. The universe was created by an all-knowing, divine, undetectable mass of spaghetti and meatballs called the Flying Spaghetti Monster (FSM).

2.  All evidence pointing toward evolution was deliberately planted on Earth by the FSM.

4. Every Friday is the holiest of holy days, which include Ramendan, Pastaover, and Holiday.

An exerpt from the open letter to the Kansas State Board of Education written by the  Pastafarian Prophet further illuminates the focus of the Church's faith.

"I am concerned...that students will only hear one theory of Intelligent Design....If the Intelligent Design theory is not based on faith, but is another scientific theory, as is claimed, then you must also allow our theory to be taught, as it is also based on science, not on faith....Furthermore, it is disrespectful to teach our beliefs without wearing His (FSM's) chosen outfit...full pirate regalia....I think we can all look forward to the time when these three theories are given equal time in our science classrooms."

It is my hope that by providing a glimpse into a couple of the other major religions out there, Tiger will know that he is not limited in his choice of prophet-driven cults based on undetectable, invisible deities. I wish him the best of luck as he decides!!

Posted by Random1 at 8:08 PM No comments: Links to this post

FOX: Where it's not just news...it's The Good News!

I have another confession:  I absolutely LOVE Jon Stewart!! To me, there is nothing sexier in a man than a keen intelligence coupled with a sharp wit and a sound grasp of reality. Incidentally, I also have a thing for dimples, blue eyes, and...well, I won't go there.

All that aside...this segment satirizing Brit Hume's suggestion that Tiger Woods needs to convert to Christianity to redeem himself is priceless (and very funny too!). My favorite part is the Avatar bit. John Oliver is THE MAN!! Click on the link below to watch.

In light of Mr. Hume's assertion that Christianity is the best religion to practice if one seeks 'forgiveness' and 'redemption', I offer the following quote.

"The bliss of the elect in heaven would not be perfect unless they were able to look across the abyss and enjoy the agonies of their brethren in eternal fire."

--Pope Gregory I (AKA Pope Gregory the Great)
Posted by Random1 at 5:50 PM No comments: Links to this post

Tonight I was searching the internet for a cutesy picture or piece of clip art that I could 'borrow' to spice up the header on my blog.  Well...while I failed to find anything useful for my header, opting instead to change the whole color & theme, I did come across this 'prayer'. I got a kick out of it, and I hope you enjoy it as well. I'm thinking of making a cross-stitch sampler from it......What do you think?
Posted by Random1 at 7:22 PM No comments: Links to this post

Ok...so it's Monday...and it's not just any Monday either, but the first Monday back to work following a long holiday vacation (I know, boo hoo, right?), and it started off more or less the way I expected it would. Fortunately, it did get better. Here's an abbreviated play-by-play of my morning:

6:04 a.m.--Woke up in a frenzied panic. Apparently, after not sleeping a wink all night and resetting my alarm (incorrectly) from 5:30 to 6:00, the melatonin I took before before going to bed finally kicked in, and I overslept.


6:20 a.m.--Checked on my kids to make sure they were up and had not set their alarms incorrectly as well and found my 6th grader asleep. A well-timed flick of the light switch solved that problem (or so I thought).


6:35 a.m.--Got concerned because the 6th grader had not yet made an appearance, and found him to be still in bed, but wide awake and in possession of a very nasty attitude. He then became the lucky recipient of a few choice words by a sleep-deprived Yours Truly...none of which were 'sweetie', 'honey', 'lovebug' (his family nickname), or even his given name.


6:45 a.m.--Discovered the obstinate little bugger still in bed and threatened him with the Wrath of Mom if he was not dressed and in the car, with hair combed and teeth brushed at exactly 7:10...NO EXCUSES!!


7:10 a.m.--Managed to get myself and all necessary children into the car and down to the bus stop on time.


7:45 a.m.--Arrived at work. Noticed the temperature gauge in the car read 26 degrees outside.


7:50 a.m.--Arrived at my office. Did not need a temperature gauge to know that it was WAY TOO FREAKING COLD inside!! I then decided to work in the conference room (which was marginally warmer) instead.


From that point on, things started to improve, as I spent most of my day alternating between catching up on what's been going on in my coworkers' lives over the past couple of weeks, and actually getting some work done. Of course, if I'm honest, more time was spent on the former than the latter (and for this I will pay mightily tomorrow). To be really honest, more time was spent trying to get/stay warm than either chatting or working. You know, I'd really like to get my hands on the guy who decided that institutions built using CBS construction don't need insulation.Who wants to be warm in winter and cool in summer, anyway? Obviously not me!

What made this manic Monday worth getting out of bed and going to work, though, was the thoughtfulness of one of my coworkers. She had the foresight to know that none of the rest of us would be emotionally or culinarily prepared for the day, so she brought in a big pot of split-pea and ham soup to share. If there actually is a Heaven, Paradise, Nirvana, Summerland, etc..., it could not be more wonderful than the warm, creamy, hammy, and split pea-y goodness of this homemade soup! Perhaps there is a God after all--his name is Comfort Food and he is best-worshipped in communion with friends.  =^)


Quote of the day:


"I sacrifice to no god save myself--And to my belly, greatest of deities."

Every now and then, when I'm engaged in an activity that allows my mind to wander aimlessly, I compose song lyrics or string quartet music, come up with ideas for novels, or write poetry. It's just one of those freakish, right-brained anomalies that can happen while I'm driving in the car, fast asleep in bed, or just about anywhere. This morning it happened while I was shaving my legs in the shower. Sometimes the end result is solid gold, and other times...more like total crap. I believe today's effort falls somewhere in the middle of that scale (but most likely leaning more toward the total crap end--lol). Despite this, I've decided to share the fruit of this creative interlude anyway. Enjoy!

When a little child reached a certain age,

His parents called him over and said,

"Let go of your imaginary friend

And learn to play with your peers instead."

But their little son protested and cried,

Insisting that his old friend was true.

"Son, that just cannot be," declared his dad,

"When the only believer is you."

Dejected and sad, the boy left the pair

To ponder a command that seemed odd.

Why must he give up his own special friend

When his folks got to keep one called God?

Posted by Random1 at 2:22 PM No comments: Links to this post