The Courage of Heretics

I was at my local Barnes and Noble yesterday browsing through cookbooks, when I got the notion to search for a book I've been wanting for a long time--Christopher Hitchens' "The Portable Atheist". Incidentally, it took me a long time to find the right section in the store. While there is row after row of Christian, Muslim, Eastern, and New Age Spiritual material, in order to find anything even resembling atheist/agnostic reading, one must go to the philosophy section--which is, itself, very small (only part of one bookcase). I guess that tells you where things stand in the battle of the New Testament Prophets vs. New Enlightenment Philosophers.

Anyhoo, I did eventually find the section, and was amazed to actually find one copy of TPA on the shelf. Whoopee!!! In my hot little hands I held nearly 500 pages of literature authored by some of the world's finest minds and all I had to do was take it up to the checkout to pay....and therein lies the true beginning of my tale.

You see, before I could take my treasure to the checkout and make it legally mine, I had to make a short trip back to the cookbook section to return a book I had decided not to purchase. It was during this small detour that I began to feel a bit self-conscious about having this bright yellow book with the word 'atheist' on my person, particularly in light of the fact that many of the patrons I encountered on this Sunday afternoon (the store was quite busy) were bonafide cross-wearing, The Purpose-Driven Life purchasing believers. So, what did I do? I completely wussed out and put my copy of TPA beneath the much larger cookbook that I did intend to buy, so that it would be less conspicuous. I then began the walk of shame to the front counter.

About half way to my destination, it dawned on me what I was doing. Here I was, a self-proclaimed godless heathen, worried about buying a book containing selected readings by other doubters and unbelievers, when many of those same authors had been shunned, exiled, received death threats, had death sentences pronounced upon them, or were outright executed for their heretical ideas. The worst I might have to face was a dirty look, snide comment, or attempt by some well-meaning believer to show me the error of my ways.

It was at that moment of realization that I swapped the position of the bright yellow book with the word 'atheist' on the cover with the innocuous cookbook and walked proudly to the checkout. It was also during that walk, the long wait in line, and the final scrutiny by the clerk, that I came to truly appreciate the amount of courage it took for these now celebrated authors to publicly express their doubt in a time when it truly could've meant the end of their lives, and not just a moment of anticipated discomfort.

Posted by Random1 at 11:28 AM No comments: Links to this post

I thought today, I would just post some atheist jokes I found and enjoyed. The trouble with religious humor though, is that no matter which side of the pro/anti-religion fence you tend to be on, the jokes in each category nearly always come off as snotty bits of superiority. Despite this tendency, the fact is, religious humor is just damn funny.

{Side note: Most of these were 'borrowed' from RichardDawkins.net}


A woman was at the beach with her children when her four-year-old son ran up to her, grabbed her hand, and led her to the shore, where a sea gull lay dead in the sand.

"Mommy, what happened to him?" the son asked.

"He died and went to heaven," the mother replied.

Her son thought a moment and then said, "And God threw him back down?"

1. He had only one major publication.

2. It was written in Aramaic, not in English.

3. It has no references.

4. It wasn't even published in a refereed journal.

5. There are serious doubts he wrote it himself.

6. It may be true that he created the universe, but what has he done since then?

7. His cooperative efforts have been quite limited.

8. The Scientific community has had a hard time replicating his results.

9. He unlawfully performed not only Animal, but *Human* testing.

10. When one experiment went awry, he tried to cover it by drowning his subjects.

11. When subjects didn't behave as predicted, he deleted them from the sample.

12. He rarely came to class, just told his students to read the book.

13. Some say he had his son teach the class.

14. He expelled his first two students for learning.

15. Although there were only 10 requirements, most of his students failed his tests.

16. His office hours were infrequent and usually held on a mountain top.

This next one I have seen in the negative, although the punchline makes much more sense (in my opinion) when applied this way rather than the other.

'Well I'm an atheist,' she replied.
'Why are you an atheist?' the teacher asked.
'Well my dad's an atheist and my mom's an atheist, and I'm not very religious myself, so I'm an atheist.'
'Well that's no reason,' the teacher replied, 'what if your parents were both morons?'
Little Sarah perked her head up and smiled then replied,'Well then I'd be a born again christian.'

Jerry Falwell was strolling along the street one day when he came upon a small boy sitting on the sidewalk with a box. Allowing his curiosity to overcome him, he stopped and peered into the box and asked the boy 'Well now, what do you have here, my son?' The box was full of warm, furry little lumps.

'Hello sir, these are my kittens. They're Christian kittens!'

'Christian kittens! Well bless my soul if that ain't the cutest thing I ever saw!' exclaimed Falwell and went about his business.

The next week Falwell happened to be in the same neighbourhood accompanied by Ann Coulter and he spotted the boy with his box of kittens up ahead.

'Ann, you have got to see this, it's just about the cutest thing I saw in my life!' he said and lead her over to the boy.

'Hello there son, what is it you have in your box there?' he asked the boy, with a broad wink to Coulter.

'Hello sir, there are my atheist kittens!'

Falwell's jaw dropped. 'ATHEIST kittens?!' he asked the boy in horror. 'But....but...but last week you told me they were Christian kittens!'

'Well sure sir, but now they've opened their eyes.'

Posted by Random1 at 7:30 AM No comments: Links to this post

Every day, on my way to work, I pass by a small, Baptist church. This particular church has a sign (as do many others) upon which Bible verses and quotes from Church fathers are posted, as a means of inspiring those passing by, like myself. Most of these quotes induce a feeling of pity within me, for their overt condemnation of and demand for utter servilitude from the sinners they hope to inspire. Occasionally though, upon the sign will be posted something that actually elicits a giggle (unintended to be sure).

One example of this was a posting around Christmas time. I didn't have the forethought then to take a photograph or write it down for later use, so I can only give an approximation of what it said, as I'm not entirely sure of the exactness of my memory.  It was something like this:

"Crist was born to deliver us from evil."

Okay, first of all, it is funny to me that the poor man (and I know it is such as I have seen the silver-haired gentleman in action) misspelled his Lord and Saviour's name on the marquee--and left it that way for over a week. What really made me laugh and even prompts me to mention this sign is the fact that the governor of the "great" state in which I live is named Charlie Crist. Now I know that Florida has traditionally been both a Bible-belt state and a Republican state, but I had no idea that the GOP was now fusing the two together in a last-ditch effort to save a less-than-impressive governor's job by making radical claims to miraculous birth. :)

This week though, the fine people of this little church have posted another message that I believe just may be the worst religious metaphor I have ever read. This time, I did manage to photograph the sign (although rather poorly). 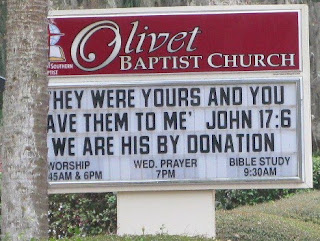 I call this metaphor "God is a thrift store, and His believers, the cast-off donations."

I suppose this might beg the question of who is supposedly shopping this thrift store, but I'll let more philosophically adept minds than mine ponder that.

--Anatole France
Posted by Random1 at 7:27 AM No comments: Links to this post