This week, a television documentary entitled 'Faith School Menace?' aired in the UK. Thanks to YouTube, the video is available to us here in the US. It is quite interesting to note that, according to data presented in the documentary, one-third of state funded schools in the UK are "faith schools," which is, of course, what has Dr. Dawkins concerned. In the US, our government doesn't explicitly fund religious private schools, however, through a system of 'faith-based initiatives' and 'school choice' (i.e., private school tuition vouchers), there is also de facto funding being provided by tax-payers to religious schools here in the States. Therefore, many of the issues raised by this documentary apply just as easily to our own secular nation.

--Richard Dawkins
Posted by Random1 at 11:12 AM No comments: Links to this post

A Godless Heathen's Love Affair with a Dead Scientist 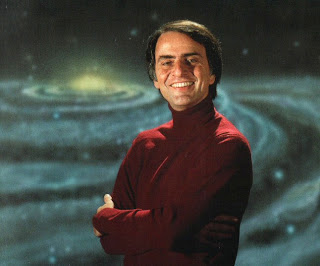 Earlier this year, I stumbled upon some videos put out by Symphony of Science, which include several very well-done musical tributes to Carl Sagan and other prominent scientists, as well as the contributions of science itself. (My personal favorite right now is entitled 'We Are All Connected' and features Sagan, Neil deGrasse Tyson, Richard Feynman, and Bill Nye. You can check out all of them at the Symphony of Science website linked above.)

Many of the images in the videos were taken directly from Carl Sagan's 1980 series Cosmos. Watching these moving videos stirred vague memories from my childhood of having seen Cosmos before, at least in part, and piqued my interest in experiencing it from start to finish.

Thank goodness for public libraries! At the beginning of the summer, I was fortunate to find that my library had one complete, 13-episode set of Cosmos on DVD and it was immediately available for check-out. From the moment that haunting theme music started and the word Cosmos appeared on the screen, I was hooked. And even though the "look" of the show and many of the special effects are dated, (my kids and I got a good giggle out of the fashions of the day---can anyone say terry cloth, tube socks and afros?), the scientific information was interesting (and surprisingly, little in need of updating) and the timeless humanist message struck such a resonant chord that I don't even remember how many times I found myself choked up or teary-eyed.

By the end of the first episode, it was pretty clear that I was completely and utterly in love with Carl Sagan.


Like any respectable love-sick fool, I wanted to know more about the object of my affection. Fortunately, when your beloved is a world-reknowned scientist and public figure, it's not hard to find information. I watched clips from old interviews and television appearances, began reading his books, and even downloaded the movie Contact from Netflix and watched it with the family. (I think it should be fairly obvious that I've got a bad case of Saganitis.) 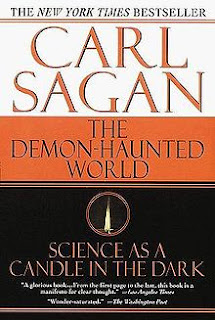 Anyway, in my quest for knowledge about Carl, the first book of his that I chose to read was 'The Demon-Haunted World: Science as a Candle in the Dark'. As a godless heathen, I figured it would be a comfortable place to start getting to know him better. I couldn't have been more right.
"For me, it is far better to grasp the Universe as it really is than to persist in delusion, however satisfying and reassuring," he states in the first chapter (p. 12).

Well, that about sums up my worldview.
At the beginning of chapter 2, I nearly wept when I read the following:

Science is more than a body of knowledge; it is a way of thinking. I have a foreboding of an America in my children's or grandchildren's time--when the United States is a service and information economy; when nearly all the key manufacturing industries have slipped away to other countries; when awesome technological powers are in the hands of a very few, and no one representing the public interest can even grasp the issues; when the people have lost the ability to set their own agendas or knowledgeably question those in authority; when, clutching our crystals and nervously consulting our horoscopes, our critical faculties in decline, unable to distinguish between what feels good and what's true, we slide, almost without noticing, back into superstition and darkness (p. 25).

How could he have known that I worry about the same basic things today?

Despite being an astronomer and astrophysicist (or maybe because of his profession), it's quite evident that however much time he spent gazing up at the stars, Carl Sagan's feet were quite firmly planted here on Earth. How could anyone NOT love Carl Sagan? Everything that I have learned about him points me to the conclusion that he was (is) the epitomy of the scientific humanist (or is it humanistic scientist?), an incurable optimist, and a hell of a great man.
{Completely Irrelevant Sidenote: If there was an award for "Sexiest Mouth on a Scientist" my vote would definitely go to Sagan. I just love to watch him talk. Ann Druyan was one very lucky woman!}
Quote of the Day:
"Somewhere, something incredible is waiting to be known."

Posted by Random1 at 10:42 PM No comments: Links to this post