You Picked the Wrong Day to Discuss Suffering

It's been a while since anyone from the local Kingdom Hall of Jehovah's Witnesses has come a-knockin' on my front door. For a couple of years, it was the same lady, with different "assistants" who would show up on a Monday morning, go through their spiel for the topic of the month in the Watchtower, read Bible verses to me, and leave the literature.  At the time, I was homeschooling my children, so I think that fact alone served as some sort of sign that I was amenable to their apocalyptic evangelizing. (I guess she wasn't aware that a sizable number of homeschoolers are irreligious.) Anyway, I never bothered to correct my visitors, as I don't like to be rude, but I never really engaged in discussion with them much either. 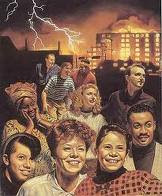 This morning, my daily ritual of perusing Facebook friends' statuses was interrupted by the tell-tale ringing of the doorbell. Instead of the familiar face of the previous disrupter-of-my-morning-routine, a different woman with 2 young girls was standing there. As I've done every other time in the past, I listened to the woman's pitch, nodded my head where expected, and remained rather passive in the hope that she would finish quickly and just go away. Not so, this time.


We were having a pleasant, albeit decidedly one-way monologue passing for conversation, when I started to feel a definite burning indignation. The woman was rambling on with her explanation of human suffering based on the Genesis story of Adam and Eve in the Garden of Eden. She started explaining that if Eve had just been submissive to God's authority rather than making her own decisions, the world would not be experiencing the level of suffering we see today. Then she continued on to explain how the Bible assures us that the occurrence of catastrophes such as the massive oil crisis in the Gulf of Mexico is part of God's plan, and ultimately will have a positive effect on humanity at large, much as personal suffering has a positive and transformative effect on individuals.

Well, as luck would have it, I finished reading a book on this very subject, written by a well-known Biblical scholar, just last night, so the subject matter was still quite fresh in my mind. Perhaps that's why I finally broke my silence and engaged a believing stranger in debate. I usually reserve such arguments for my intellectual friends, who know me well enough not to take personally any argument I might express against their religious beliefs.
I won't bore anyone with the trivial details of our discussion. Mostly I simply tried to gently but firmly direct my guest to references found in the Bible itself that counteracted whatever point this nice woman was raising about the Bible confirming the necessity and benefits of having a 'loving' God who permits such abundant suffering in the world due to the concept of 'original sin' (Thank you, Dr. Ehrman!). This lasted about 10 minutes, with the poor woman bobbing and weaving gallantly, but never really addressing the 'evidence' disproving her claims that I provided from within her own holy book. Near the end of our discussion (which she abruptly cut off with something of an 'agree to disagree' remark), her elder daughter, who appeared to be about 11 or 12 years old, started asking me questions, which I have to admit to feeling a great deal of personal satisfaction in answering. (I suspect this is truly what prompted the end of our discourse.) She made a statement about how I obviously have spent a good deal of time exploring the subject. We parted on congenial terms and I wished them all a pleasant day.
Now, I realize the regaling of this encounter might come off as a bit pompous--like a smug tale of how I 'took down' the religious lady with her own weapon. That is not the intent. I look at it more as an opportunity to evangelize the merits of scholarship and skepticism to the evangelist, and perhaps sow a small seed of doubt in the mind of this woman's obviously inquisitive child. As for the mother, I figure this experience will simply strengthen her resolve, given the expectations and belief system of those sent forth to spread the Word. At a minimum, it might just save me from future Saturday morning interruptions.
Quotes of the Day:
"It will not do to investigate the subject of religion too closely, as it is apt to lead to infidelity."
--Abraham Lincoln
"The Bible is a mine rich in the ore of cognitive dissonance."
--Delos B. McKown
Posted by Random1 at 2:53 PM 1 comment: Links to this post

To anyone who actually follows this blog, it's been some time now since I last posted anything. As the school year drew to a close, the stress of wrapping things up at work by predetermined deadlines sort of sucked the "piss and vinegar" (as my dad would say) out of me for a while. Now, however, after a few weeks off, I have regained said P and V and feel the need to come out and rant a bit.

By JENNIFER LEVITZ and STEPHANIE SIMON

"LAKELAND, Fla.—When his budget for pencils, paper, and other essential supplies was cut by a third this school year, the principal of Combee Elementary School worried children would suffer.


Then, a local church stepped in and "adopted" the school. The First Baptist Church at the Mall stocked a resource room with $5,000 worth of supplies. It now caters spaghetti dinners at evening school events, buys sneakers for poor students, and sends in math and English tutors.


The principal is delighted. So are church pastors. "We have inroads into public schools that we had not had before," says Pastor Dave McClamma. "By befriending the students, we have the opportunity to visit homes to talk to parents about Jesus Christ." 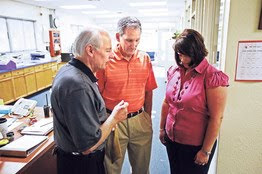 Here, the pastor prays with the principal before handing out gifts of shoes to students.
Am I the only one who finds anything wrong with the fact that the church pastor openly admits that any financial aid provided to the school comes with the explicitly stringy condition that he (and other church representatives) be able to evangelize to students and families attending the school? Even worse is the school principal who is quoted as saying, "My personal conviction is that I hope through this they'll know Jesus and they'll get saved."


WHAT THE HELL!?!? Isn't that the purpose of privately funded parochial schools? I thought the idea was that some organization would help provide the basic necessities that the school cannot afford to provide due to severe budget cuts. Silly me. Obviously, preparing students for real life in the here and now is secondary to saving their souls for the afterlife and filling church pews and coffers.


Would any other school "business partner" be allowed such privileges for such a small donation (or any donation, for that matter)? I find it difficult if not impossible to believe that the store manager of the local Wal-Mart would be able to plunk down $5,000 worth of school supplies and then have the opportunity to visit with students and their families at their homes in order to share the "gospel" of saving money by shopping at Wal-Mart. Of course, I could be wrong....

"The rivers of America will run with blood before they take our holy, God-inspired Bible from the schools."

--William "Billy" Sunday
Posted by Random1 at 1:50 PM No comments: Links to this post