A Godless Heathen's Weekend Travelogue of The Big Apple: Part 1

Friday morning, at approximately 10:30 a.m., my husband and I took off from Orlando, Florida, defied the laws of nature, and headed north to New York City for a long weekend vacation. It is a trip I have looked forward to for months now. 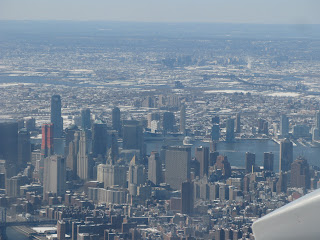 Our flight up was uneventful and we got a couple of good arial shots of the city and Statue of Liberty as we descended. It only took us 10 minutes to get off the plane and out the door to the shuttle bus, which made the process of getting to the city a breeze. 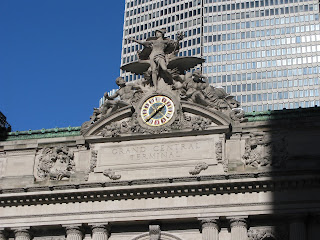 **From one NY newbie to another--here's a 'Newbie' travel tip: Instead of taking a cab from the airport (a $30-$50 expense), consider taking the shuttle bus instead. Tickets are on sale right as you exit the terminal and only cost $5 per person to Grand Central Station, where you can either take a train wherever you need to go, or take their hotel shuttle from Grand Central. Be advised though, that the same shuttle back to La Guardia costs $12.** 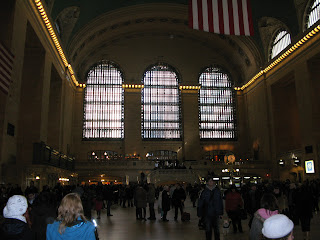 After about 30 minutes on the bus, we arrived at Grand Central Terminal, which I just love! One of the things I find to be the most interesting about this city is the extreme diversity of individuals coexisting here. For example, just on the shuttle bus, there were people hailing from at least 6 different countries, just based on the languages that I could identify from people sitting around us--and I'm certainly no linguist, so there most likely were more. Take a walk through Grand Central Station and it's what I imagine walking around the United Nations must be like. It's this wonderful characteristic of New York that makes one feel less like a citizen of any particular country and more like a citizen of the world. 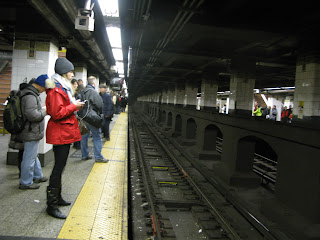 From Grand Central, we hopped a shuttle train to Times Square, and then walked the 2 blocks to our hotel. (There actually is an underground passageway that we could've taken and come up topside a few hundred yards from our hotel, but we didn't discover it until our 3rd day.)
Once we'd checked in and dropped off all of our non-essential gear in the hotel room, we set off to explore the area. 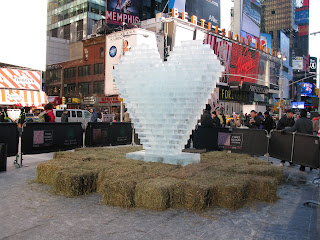 This cool ice sculpture was displayed in the middle of Times Square and people were lining up to get their pictures taken in front of it. Later that evening, the barriers were taken down and you could stand right on the hay bales up close to the sculpure. Very nice!! 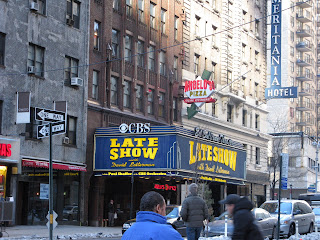 We wound up meandering along Broadway, past David Letterman's studio, down 53rd, and over to Madison Avenue. 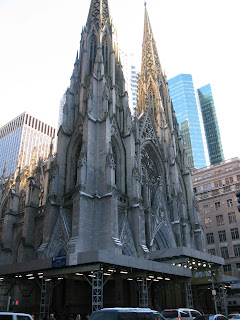 On Madison Avenue, we came upon St. Patrick's Cathedral. Despite the presence of contractor's scaffolding erected outside the church, presumably due to restoration work, this Gothic monument was stunning. Inside the cathedral was even more impressive. What follows are some of the photos I took from inside St. Patrick's. 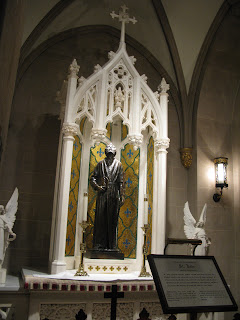 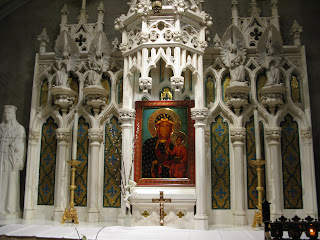 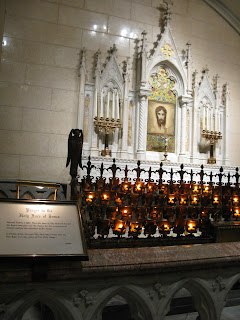 I found it fascinating that each little alcove (and I know they have a proper name but I'm blanking on it) had a different focus for prayer...and a station where candles could be lit to help speed prayers to the desired recipient, whether it be St. Jude, Mary, or The Face of Jesus (not Jesus himself, mind you, just his face).


Even more fascinating (and chuckle-worthy) was the sign at the very back of the cathedral where 2 large stands of prayer candles stood. As beautiful as the architecture and artwork was, and as peaceful and contemplative the ambience, The Church never allows one to forget what REALLY matters. 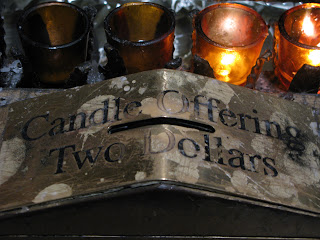 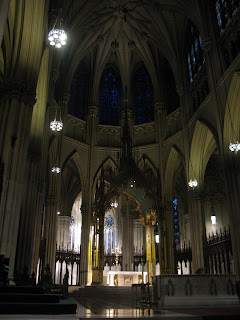 Well, at least now I know how The Church could afford to build such marvelous edifices. :)
From St. Patrick's we strolled down Madison to 50th and over to Rockefeller Center. On our first trip to NYC, we wanted to skate but were too tired and sore from walking and promised we'd do it next time (i.e., this time). Well, this time, we didn't do it either. 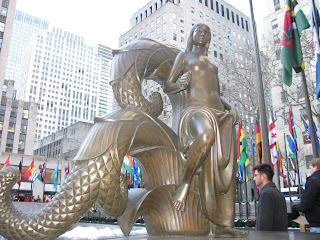 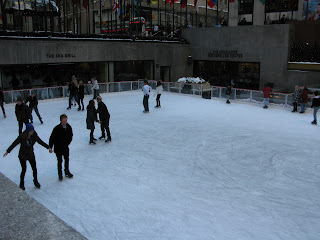 **Newbie travel tip: Rockefeller Center charges nearly $30 for the privilege to skate for a limited time on very crowded, very small ice. We found out later that for around $10, one can skate at one of the less prestigious rinks in Central Park.**
Later that evening, we tried to get tickets to see Phantom of the Opera, but we got there late, and as they only had single seats available, we opted instead to see another little musical called "The Fantasticks." We had never heard of this show, but apparently it is the longest continuous running production in American theater, and a bit of a Broadway staple. The theater was tiny, seating only about 200 people, and the showing we attended only had about half that many in the audience. All in all, it was a well-done, intimate, reasonably priced and enjoyable show. Interestingly, the young adolescents in the audience seemed especially to appreciate it, judging by the outbursts of uninhibited laughter during many of the comedic moments--which actually added to the experience.
**Newbie travel tip: On and off-Broadway shows often have discount tickets (30-50% off box office prices) available at a kiosk in Times Square, if you don't mind waiting in line. However, if you don't have your heart set on any particular show, the lines seem to dissipate about 45-60 minutes prior to showtime and you can just walk up to the window and get tickets to whatever's available.**
...and thus, ended day one.
Posted by Random1 at 5:57 PM No comments: Links to this post

A young monk arrives at the monastery. He is assigned to helping the monks in copying the old canons and laws of the church by hand. 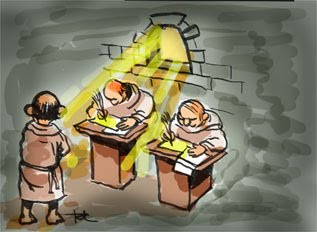 He notices, however, that all of the monks are copying from copies, not from the original manuscript. So, the new monk goes to the head abbot to question this, pointing out that if someone made even a small error in the first copy,it would never be picked up! In fact, that error would be continued in all of the subsequent copies. 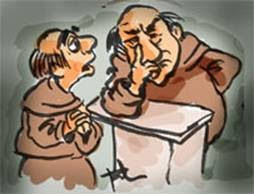 The head monk, says, 'We have been copying from the copies for centuries, but you make a good point, my son.' 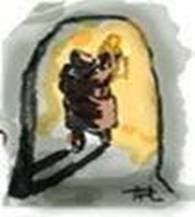 He goes down into the dark caves underneath the monastery where the original manuscripts are held as archives in a locked vault that hasn't been opened for hundreds of years...

Hours go by and nobody sees the old abbot... 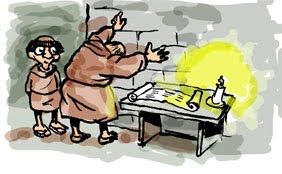 So, the young monk gets worried and goes down to look for him.
He sees him banging his head against the wall and wailing,


His forehead is all bloody and bruised and he is crying uncontrollably.
The young monk asks the old abbot, 'What's wrong, Father?' 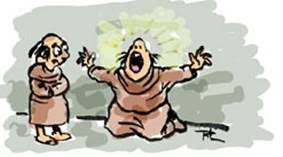 With A choking voice, the old abbot replies,
'The word was...

Posted by Random1 at 10:12 PM No comments: Links to this post